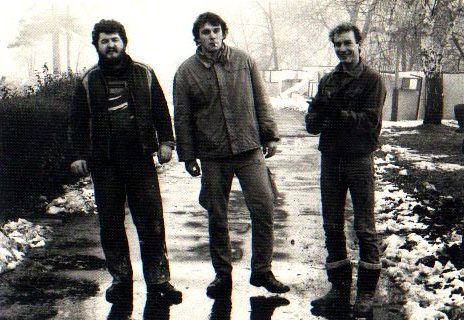 1945, After World War II the „black market“ was running wild throughout Eastern Europe. Poland and Czechoslovakia had a very profitable system of importing and exporting through the black market. The border of the country was closed so to be able to import or export without paying taxes the people must take the long journey over the mountains.

When police discovered how the smugglers were getting through, it was up to the dogs to literally hunt the people. Horses were and still are a great commodity in Slovakia. They were brought over from Poland and traded for sugar, chocolate and coffee.

1948, „Znarodenie“ This is the day that the government took all businesses away from citizens. This was a tragic day for all; for our friend’s the Mravik’s it was completely devastating. The newest technology and the most advanced in furniture manufacturing was a very profitable company in Zlaté Moravce, Slovakia owned by Josef Mravik.

On Wednesday, July 1, 1948, Mr. Mravik was a rich, successful entrepreneur. On Thursday, July 2, 1948 he was poverty stricken with 2 children and cast out on the street. The police came to his factory with the dogs and confiscated the entire property.

1955, Communist money exchange. All people can make the same amount of money. In these 7 years Mr. Mravik had built up his furniture business in Bratislava. Again-Everything was taken from him but in a different way. He had $46,000 SK in the bank. On Monday, February 3, he had $1000 SK. The government decided that no one could have any more than anyone else. Work was 8 to 4 and only 1 job is allowed. No one could work after 4 or a 2nd job to make more money. This is when the private citizens started working dogs as a hobby to occupy time.

In the 1960’s a Government organization was formed named Zvazarm. They began to see the value to the country of private citizens training working dogs. This originally was formed to promote working dog breeds and financially support clubs who trained the dogs. Sounds nice but here’s the catch, if war broke out, your dog that you trained was taken by soldiers to be used in the war. No exceptions. All dogs actually belonged to the government.

I can not imagine anything more painful than to watch my sweet Bruna drug away from me by a soldier to be used as a weapon for a country who had done me no favors. But, if I was a young man going to war – I would be taking my dog with me. Personally, I would rather leave my dog at home in the bed and take someone else’s dog.!

The dogs were heavy, strong boned and had huge heads. They were slower but powerful. Obedience was a necessary evil. The dogs never looked at the handler with dancing footsteps. They did obedience because they had to but they were always watching for a bad guy. For so many generations in the Eastern Block the dogs were made for war. There was no other motivation. The dogs must function on their own. They had to be able to work independently of the handler. They were expected to think for themselves in many situations. They were titled out in the forest, not in a stadium. The ZVV/SVV title is a „real-life“ situation title. Until 1989 there were no separate show and working lines. All German Shepherd Dogs were working dogs. When the border opened the German influence began and the breed began to be separated.

West Germans have always placed a lot of influence on Schutzhund. The dogs performed in a stadium not a train station. The extreme high nerves of the West German dogs can be attributed to the use of the dogs in sport. The dogs must not think for themselves. Their entire goal needs to be to please and work for the handlers. This is comparing apples to oranges. The traits that the Eastern block needed in the dog was considered stubborn or too independent and the West German dogs were considered nervous or needy.

The East German (DDR) dogs and Czech dogs were interbred successfully because they were breeding for the same characteristics. Prior to 1989 the show line dog did not exist in Czechoslovakia. There was one GSD and they worked or they were not bred. The dogs still were required to get a show rating and a black or sable dog could win just as easily as a black and tan dog.

Tremendous emphasis was/is put on the tracking ability of the dog. The dogs were used in rugged conditions in the snow and ice to find criminals hiding in the mountains. The dogs and handlers were out for days at a time tracking the smugglers. Dogs were not sold. Their work was essential to the survival and economy of the country. The dogs were not social to people outside their family unit. We must realize as people from North America that the social structure of a communist country is completely different than what we are familiar with. Lawsuits do not exist. If a dog bit someone, that person had no recourse to sue the individual who had the dog because they were owned by the government and the government cannot be sued. The dogs were always right and the bitten person just had tough luck! So the dogs were treated with tremendous respect. North American Police dogs typically need to be openly social because of the demands put on the officers by our society.

Many old school breeders believe that this is leading to the demise of the true Police and Border Patrol dogs. Because North Americans will only purchase the social dogs for police work the old style tough Police dogs are not being used for breeding as much. It is all economics. So much of the old blood that made up the border patrol dogs has vanished.